A CAPABLE CRUISER: For Sale

Included in this repost of my November, 2014 description of Murre are a number of current interior and detail photographs. These shots were taken March 7, 2015 and can be found by scrolling to the bottom of this article.

My tough cruising ketch and my sole companion for over 12,000 miles of Pacific Ocean passage-making, Murre, is for sale.

I bought Murre in 2001 and spent many summer weekends, and even some work nights, sailing her to the far corners of the San Francisco Bay. For years, the favorite activity of my wife and I was to high-tail it to Murre on a Friday evening and be anchored at Paradise Cove or China Camp before nightfall. In the winters I often put Murre in a covered berth where I slowly rebuilt and readied her for more challenging waters outside the Golden Gate.

In 2010 Murre and I took off. Over two years we made three long ocean passages; we explored Mexico’s Sea of Cortez, the tropical paradises of French Polynesia and Hawaii and even Alaska’s glaciers and the Inside Passage (map). Our course covered thousands of miles of open water; we passed through the trades three times and over the equator twice; survived calms and gales; saw seabirds and dolphins and flying fishes and the vast Pacific from 20 south latitude to nearly 60 degrees north. Without doubt it was the grandest adventure I could have imagined.

We returned under the Golden Gate late in 2012, and I’ve since been organizing the Figure 8 Voyage, a different kind of exploit requiring a much different boat.

So, my capable cruiser awaits her next departure with a new owner.

Murre is a Far East Mariner 31 built in Japan in 1972 and restored in California between 2003 and 2010. She is ketch rigged and has a full keel with cut-away forefoot and big, strong rudder controlled by a robust worm gear of bronze. Her hull is solid fiberglass, insulated between the deck and waterline, and her ballast is encapsulated. Her deck and cabin construction is glass and wood sandwich, replaced and heavily reinforced during the rebuild.

Accommodations: Galley to port of companionway; small navigation station to starboard; two settee berths in main salon and fold-out dining table. Single head forward to starboard and hanging storage locker to port; large v-berth plus ample lockers both in the boat and in the cockpit. 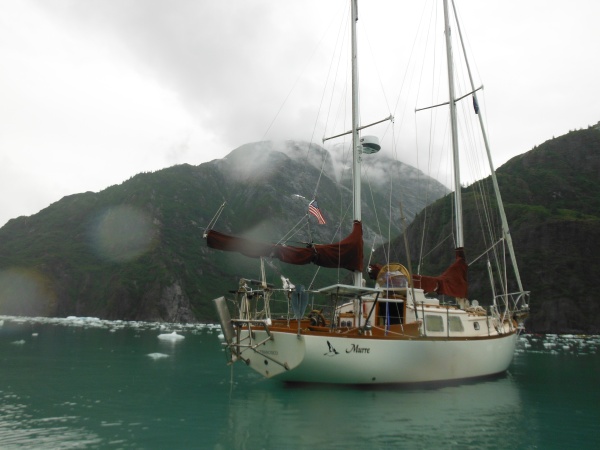 2003 — Rebuilt and reinforced deck and cabin sides; stripped all bottom paint and applied barrier coat. Read about it.

2009 — Fashioned and installed new bowsprit and spreaders. Read about it. 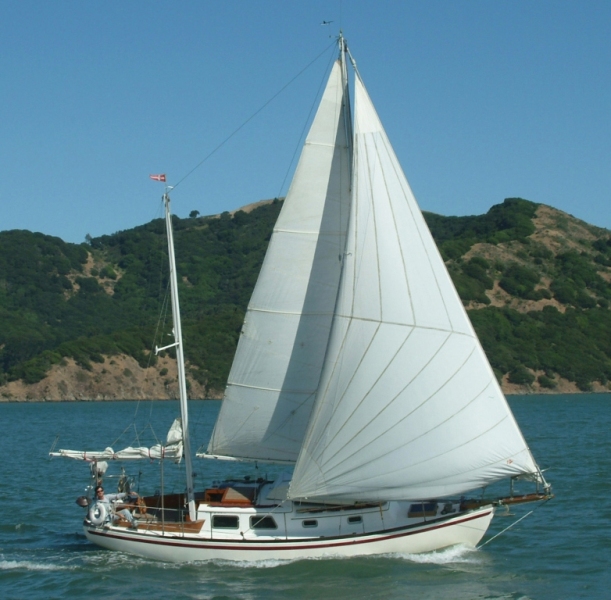 Back on the waters of San Francisco Bay

Painting of Murre commissioned by my wife from artist and family friend, Nick Stewart. Not included in sale, not by a long shot. Contact me if you’d like to commission Nick for yourself or reach him at www.stewart2.com.

New batteries in and under load.

Why the hood is good.

Strategy for first half of passage–up and to the left. 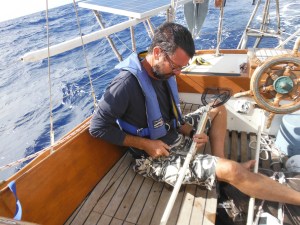 Creating my debris capture system, a tiny net on a long pole. 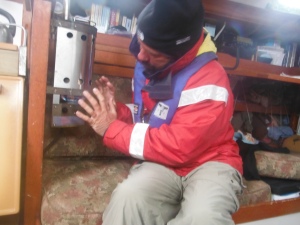 I see flame, but do I feel heat?

Running under poled-out jib only.

Yippie, say the solar panels that now have sun to work with.

Making smart time on a clear day with the Monitor. 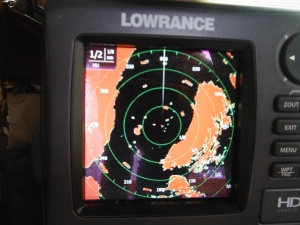 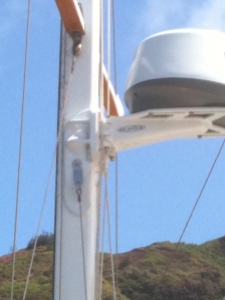 Around 40N–it’s starting to get cold. 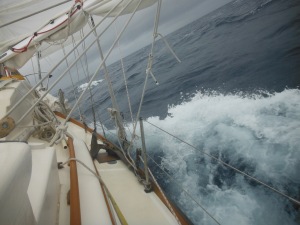 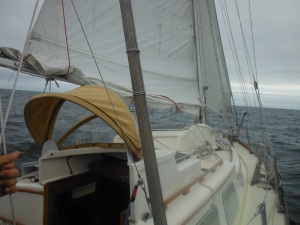 Into the Infinite Blue.

Nav station is fully visible from the wheel.

One of four solar panels.

Hard dinghy is a Bolger Tortoise.

Large icebox is under green counter lid. Storage behind counter and stove extends down below the waterline–i.e. vast amounts of food storage for a boat of this size.

All interior lighting has been retrofitted to LED.

Salon table opens to easily accommodate a party of four.

V-berth is wider than a king size bed.

Anchor chain has been redirected into a large space below V-berth where there is room for the quantity one needs when cruising; this also moves the considerable weight of chain aft and down.

← No One Died
A Gaffe Revisited →

6 Comments on “A CAPABLE CRUISER: For Sale”